Since the Club was formed it has succeeded running annual Summer Programmes along with regular weekly training sessions, entered various leagues and developed young sports leaders to Level 1. “And this is what is really liked about Acorn Football Club, for people that are really interested and want to continue they provide the opportunity do to that” says the Community Development Worker of Community Links.  At the moment we are talking about expanding to enable more young people to take part and think it’s a great initiative to invite other age groups to join not only for the fact that it will keep more young people out of trouble but also for the mentoring opportunities it will give to the older members along with the responsibility of supporting the younger ones.  We shall continue planning Summer Coaching Programmes which will fill a big gap for youngsters that can’t go on holiday and give them something to do. They will keep fit and parents don’t have to worry about where they are or what they get up to.

On 21st September 2010 the club became affiliated member of Tower Hamlets Sports Council, and the Tower Hamlets Football Partnership promoting participation and achievement in sport within the Borough by representing the interests of local sports clubs and individuals.

March 2010 the Club was presented with a Communities of Health Award at NHS Newham / Newham Link, Listening Event held on 12th March 2010 at West Ham Football Ground Conference Suite. The event was a high profile event with Joan Saddler (OBE – National Director of Patient and Public Affairs), and Marie Gabriel, Chair of NHS Newham. The club was recognised by the NHS as a Community of Health club for outstanding services in improving the health and well being of local people.

Acorn FC had an outstanding first season in the East London Sunday League and the Power League. As new comers in the league, Acorn FC blasted the Third Division U/16s finishing mid table, scoring an amazing 140 goals in all competitions and tournaments, ending the 2008/09 season with Sportsmanship trophies.   The end of season finale and presentation was held on 22nd May at the Community Links Club, next to Newham Leisure Centre. Player awards were presented to Liam Mosey; club Goal Keeper voted Most Improved Player of the season. Top Goal Scorer trophies were also awarded to Rakeem Russell and Robert Brown both scoring 18 goals for their respective A and B teams. Samuel Oki received a special achievement award, for Managers Player of the Year and voted by the team as Players’ Player of the year with spectacular performances at the heart of the defence.

On 29th January 2009 Acorn FC’s Club Development Co-ordinator, Darrell Isles was presented with the club’s FA Charter Standard Club Award (FA CSC) by Ian Bent, Club Development Officer and John Manning, Inclusion Development Officer of Essex County FA for setting good standards in discipline, organisation and best practice. As a generous token the club was also given Umbro vouchers for the value of £100.00 in total.  Air Football5 a side tournament in partnership with the Metropolitan Police also took place at Fairlop Power League, Forest Road, Hainault to raise the issue of Knife Crime in our local boroughs.  With a clear message RESPECT LIFE, PUT DOWN KNIFES…this event was delivered by using football as the tool with powerful  talks from Andy Pope (Met Police) and Jim McDonnell (5 time Boxing Champion). There were also special appearances from John Moncur & Gifton Noel-Williams (Pro Footballer) and Ziggy (TV

AFC reached the final of the Swift Football Tournament. This was a football tournament with a difference 13 teams competed. It was not only for young people, though there were plenty of those, teams had to include a player over 40 or under 14 and a female player. In total there were 118 participants in the competition that required teams to be mixed in terms of age and gender. The games were5 a side with squads ranging in size from five to nine. The first round consisted of three mini-leagues, the top two teams from each group and the highest runners up progressed to the knockout rounds. Acorn progressed through to the final where they played in a hard fought final against Elim FC, which Elim FC triumphed 9-5. The emphasis was on fun and inclusion. 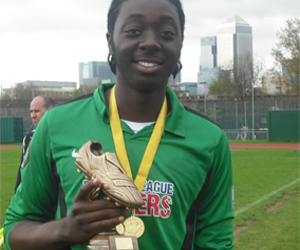